Anna Neagu1 and Wolfgang Maier1
1Friedrich Miescher Institute for Biomedical Research, Basel, Switzerland
Correspondence to: Wolfgang Maier (wolfgang.maier@fmi.ch)
Allele-specific PCR (AS-PCR) is an inexpensive and fast method to discriminate genotypes based on single nucleotide differences. It relies on the requirement of Taq polymerase for valid base-pairing between the template and the 3’-most nucleotide of allele-specific primers (ASPs). In its simplest form, an AS-PCR combines three primers in one reaction: two ASPs, each of them matching one of the two allelic nucleotides at its 3’-most position, and a common reverse primer. For the single-tube reaction, at least one of the ASPs is tagged to distinguish the alternative products, e.g., a size tag of 5’ non-specific nucleotides allows for separation by gel electrophoresis. Unfortunately, the method requires extensive optimization of conditions to obtain sufficient specificity for unambiguous genotyping, which has hindered its wide-spread use in genotyping SNP alleles and is preventing its use in SNP mapping.

We realized that the amplification process limits specificity of single-tube AS-PCR because relatively rare events of mispriming generate allele-switched amplicons that are propagated during subsequent cycles (Fig. 1). We found that incorporating additional mismatches into the ASPs that make them different from both the template and one another at the third-last position prevents this problem because a single round of amplification now results in amplicons with a perfect match to one ASP, but two mismatches to the other (which is not achieved by introducing a common mismatch into the ASPs as sometimes suggested). Thus, mispriming is effectively limited to the original template and the inherent specificity of the polymerase for the matching primer is preserved over any number of cycles. We routinely use this improved snPCR (for PCR with single nucleotide specificity) in the Alcedo lab to follow genotypes during crosses and found it to be just as robust and reliable as standard PCR (two examples are given in Fig. 2). snPCR works well with standard worm lysates and optimization of conditions is usually not required. For separation of the alternative products we use size tags of 25-30 non-specific nucleotides on one of the two ASPs and 3% agarose (Nusieve 3:1 for the separation of nucleic acids < 1kb) gels. To achieve good separation we design the primers to amplify fragments of < 500 bp. We have also successfully used Cy5/Cy3-labeled ASP pairs to distinguish products based on fluorescence rather than size and read out genotypes from standard gels with a fluorescence scanner. Avoiding interference between the size tags and overcoming the product size limitation this approach should enable the multiplexing of snPCRs and should make the method useful also for SNP mapping. Since relative allele frequencies can be determined with snPCR it should be compatible with the bulked segregant analysis described by the Plasterk group (Wicks et al., 2001) and represent a convenient and fast alternative to allele-specific restriction digests.

During the preparation of this article, we found that the principle behind our snPCR has recently been described elsewhere (Gaudet et al., 2009). The authors state that any mismatches within the last 5 nucleotides of the ASPs – even if they differ in position between the two ASPs – can be chosen, provided they result in two versus zero mismatches after the first round of amplification. This finding is in good agreement with our mechanistic explanation and, if true, makes the design of the ASPs quite flexible.

Figure 1: Specificity loss during amplification in AS-PCR. Each round of amplification is accompanied by allele switching at the mispriming frequency f. This lowers the ratio of correct/incorrect product, which drops off fastest during initial cycles and then approaches a 1:1 ratio asymptotically as simulated on the right for four hypothetical values of f (1:50, 1:100, 1:150, 1:200; with an assumed PCR efficiency of 0.7). To ensure a product ratio of at least 10:1 after 30 cycles f must be < 1%. In snPCR the ratio is independent of cycle number remaining constant at 1/f.

Conversations at the 2011 IWM prompted me to share the following. A recent attempt at microinjection resulted in only a few F1 transgenics (< 0.2 F1s per injected animal) and no transmitting lines. The major cause was traced to the use of RNase in a newly-opened Qiaprep Spin Miniprep Kit. I have been routinely omitting addition of RNase to the P1 suspension buffer in the kit due to a previous failure to recover F1s if RNase was used with modified alkaline lysis and ethanol precipitation (Birnboim and Doly, 1979), even with organic extraction. Using new plasmid DNA prepared with P1 lacking RNase, many F1s and transmitting lines were recovered, though the efficiency, ~7 F1s per injected animal, was still significantly lower than the ~25-29 F1s per injected animal reported by Mello et al. (1991) at similar DNA concentrations (180 ng/μL; see Table 1). The optional PB rinse step in the Qiagen kit did not seem to improve the efficiency. Instead, it was found that Ethanol Precipitation (EP) of the Qiagen-prepared DNA increased recovery of transformed F1s to an efficiency close to that of Mello et al. (1991) (Table 1).

The precipitation step significantly improved recovery of F1s and transmitting lines with routine injections and, especially, recovery of insertions with the Mos-based Single Copy Insertion method (MosSCI; Frökjær-Jensen et al., 2008). The very similar but less expensive Fermentas GeneJET Plasmid Miniprep kit (#K0503; omit RNase, add EP) was also found to work just as well. It is acknowledged that others in the community may not be experiencing any issues with their miniprep DNA and that their experience might be completely different from what is reported here, for a variety of reasons. However, if some are experiencing low worm transformation efficiencies with spin column-purified DNA, the omission of RNase and addition of Ethanol Precipitation might be worth trying.

(1) EP of DNA made with P1+RNase was not tried, as previously it was found that DNA made following alkaline lysis, RNase treatment, organic extraction and EP did not result in DNA preps that gave good worm transformations.

(3) Scored by rescue of the unc-119 locomotory defect. The proportion of F1s making transmitting lines was not scored.

(4) Plasmids pDP#MM016B [unc-119(+)] and pMM824 [unc-119::mCherry] were transformed into E. coli XL2-Blue. 4-mL overnights were grown in LB+carbenicillin (10 μg/mL). DNA was prepared using the Qiaprep Spin Miniprep Kit without RNase in the P1 buffer, and eluted in 50uL of EB (10 mM Tris pH 8.3). Agarose gels of DNA prepared without RNase suggest very little RNA (if any) survives the final elution step. DNA concentration was measured with a Nanodrop spectrophotometer and the injection mix made in EB to a final concentration of 90 ng/μL per plasmid in 10 μL.

(5) Ethanol Precipitation was performed by adjusting the volume of the original plasmid preparations to 200 μL with ddH2O, adding 20 μL of 3M sodium acetate (pH 4.8) and 550 μL of 95% ethanol, placing at -20°C for 15’, pelleting at high speed for 10’, rinsing the pellet in 80% ethanol, and suspending in EB. Concentrations were adjusted to 500 ng/μL and a second injection mix was made in EB at the same DNA concentrations.

Paul Sternberg
Division of Biology and HHMI, California Institute of Technology, Pasadena CA
Correspondence to: Paul Sternberg (pws@caltech.edu)
After years of dropping my worm pick on the floor, only to have it shatter because it was forged from a Pasteur pipette, I have started to use a metal-handled pick.  The problem with my previous attempts to use metal handles failed because it was difficult to cinch them onto the platinum wire. However, using thin stainless steel sheet metal as a shim, it is straightforward to adapt X-acto knife holders (Fig. 1A) as worm picks.

Fold metal into a WW shape to make eight layers (Fig. 1D) that can sandwich the wire in the middle.

Sandwich the wire with the sheet metal (Fig. 1F).

Some of the handles come with screw-on caps (Fig. 1H), which protect the pick if you put it in a lab coat or pocket. Fancier handles are available (Fig. 1I-J).  The handles can be engraved for special gift editions. 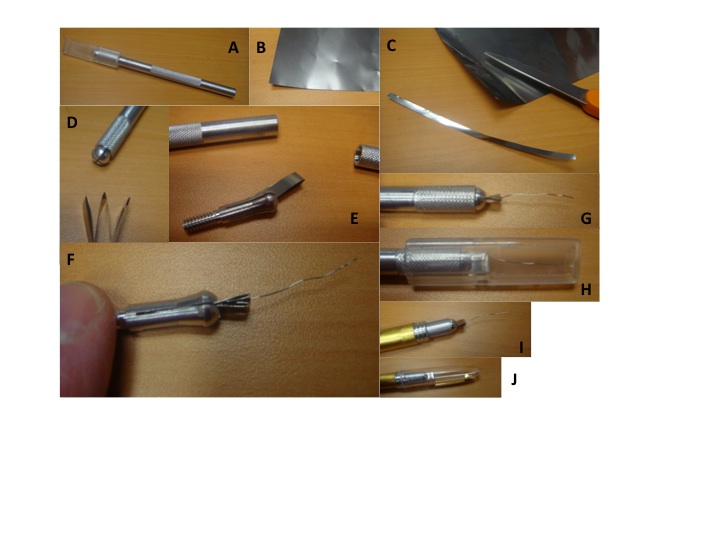 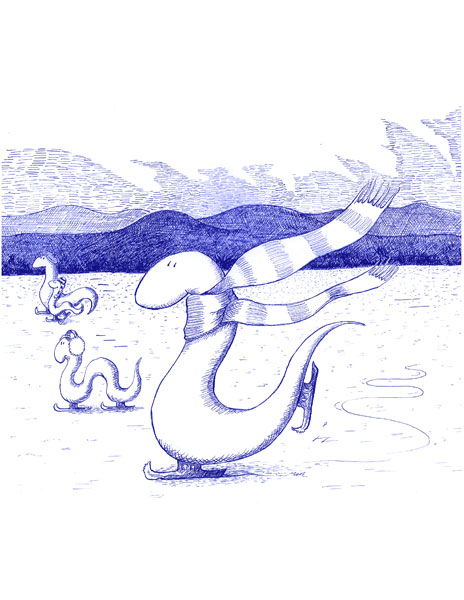