The Worm Lab Project at the Worm Breeder's Gazette seeks to capture the rich history and scientific spirit of the C. elegans research community. We invite all Principal Investigators/Lab Heads of laboratories registered with the CGC to take the Worm Lab Project interview!

Biology and Institute of Molecular Biology
University of Oregon
Eugene, OR, USA

When did you join the field?

What brought you to the field?

I interviewed for a postdoc with Marty Chalfie while still in grad school at UCSF, and his infectious enthusiasm convinced me I wanted to work with C. elegans. But I had already been lured to the early embryo by Jim Priess’ 1987 Cell papers on GLP-1/Notch signaling and the induction of the anterior pharynx. So after visiting Marty’s lab I wrote Jim Priess asking him if I could visit his lab to explore postdoc possibilities. Jim never replied (I later learned he never checks his mail, as in USPS mail), and so I called him on the phone, and by the fall of 1989 arrived in his lab to start my postdoc.

My first project was to follow the lineage of a hypodermal precursor (I think it was ABplap), and determine if a cell interaction influenced its fate. I spent many hours drawing embryos and this cell lineage as it underwent its divisions, and eventually was able to follow the lineage to its terminal divisions. I was very pleased to be doing some lineaging; I would brag to my former PhD classmates how the only solution I was using in my postdoc was agar and water. However, all I got out of this project was a lot of pretty drawings. In parallel, we had begun EMS screens for embryonic lethal mutants and found a skn-1 allele, zu67. I switched to working on skn-1 (a.k.a. skinhead) and spent most of the rest of my postdoc focusing on that project, which was very satisfying. I finally knew I had found a niche in life and wanted to stay in science. Working in lab with Jim was, and remains, such a wonderful privilege.

What is your specific research focus?

A strength and a weakness of my research is that I have never really had much of a specific focus. Most of the research projects in my lab have originated from the identification of embryonic-lethal mutants with interesting defects in early embryogenesis, initially with respect to cell fate patterning but subsequently focused more on cytoskeletal function and early embryonic cell division. As a result, our focus has shifted from time to time as we found mutants that proved to have defects in a range of different genetic pathways. Some of our most satisfying contributions include work on Wnt signaling in the early embryo, ubiqutin-mediated proteolysis/CUL-3 function in the early embryo, mitotic spindle assembly, cytokinesis, and most recently oocyte meiotic spindle assembly. We also have recently begun to apply Illumina-based genome-wide SNP mapping and whole genome sequencing to more rapidly identify the affected genes in large numbers of temperature-sensitive, embryonic-lethal mutants, focusing on those with penetrant defects in embryonic morphogenesis (a collaboration with Zhirong Bao at Memorial Sloan Kettering Cancer Center). Our lack of a focus has been a weakness in that my lab has never had an identity with respect to a specific biological process as a research focus, and that has probably made it more difficult to recruit graduate students and postdocs, although I have been very satisfied with the number and quality of people who have joined my lab over the years. Our lack of focus has been a strength in that my lab has explored a variety of fascinating pathways and processes, and I like something Sandy Johnson at UCSF once told me when I was finishing my PhD–that one of the best things you can bring to a field is naivite. While there are limits to that perspective, I have always felt like there also is some truth to it; that one enters into a new field without having a lifetime of dogma potentially clouding one’s perspective.

I could go on forever here! Welcome to my blog.

Favorite experiment: showing that Wnt signaling influences the orientation of the mitotic spindle in EMS independently of gene expression, suggesting that Wnt signaling can directly target the cytoskeleton (rather than first influencing gene expression in the nucleus via its influence on beta-catenin and TCF transcription factors). I felt like this was a novel contribution to the field of Wnt signaling and it began a shift in our focus from cell fate specification to cytoskeletal function and cell biology. Ann Schlesinger was the second PhD student to join my lab and this work was the primary focus of her dissertation work.

Humorous story/meeting anecdote: It amazes me how even today, some 25 years later, people still regularly ask me about the big food fight at the worm meeting in Madison, in what must have been 1991, when I was still a postdoc in Jim Priess lab. That was a very special food fight (I was a veteran of food fights from Cold Spring Harbor RNA Tumor Virus meetings during my PhD work in the Harold Varmus lab at UCSF). However, I do remain disappointed that my efforts to lead a charge on the many big name faculty watching from the top of the steps was unsuccessful. And Judith, I am really sorry about that cleaning bill (very odd that the banquet room had red velvet wallpaper). I understand it was an immature and irresponsible moment in my life. But that cream puff pie was a really dangerous choice for dessert, and it sure was fun to take advantage of it (and spare people from actually having to eat that stuff!). And after the food fight was over, I will always be grateful to John Sulston, Phil Anderson and Alan Coulson, who effusively congratulated me on my effort while I was in the bathroom hiding from Judith Kimble.

What is your lab’s biggest contribution to the field?

I would have to say that our biggest contribution (not counting the Madison food fight) was our discovery that MEL-26 is an adaptor protein that recruits MEI-1/katanin to a CUL-3-based E3 ligase, targeting MEI-1 for degradation by the proteasome after the completion of oocyte meiosis I and II. This work was done by two graduate students in my lab, Thimo Kurz and John Willis, in a very productive collaboration with Lionel Pintard when he was a postdoc with Mathias Peter and Pierre Gonczy. This discovery is particularly significant in that it established that proteins with a Cullin-binding BTB domain and another protein-protein interaction domain function as adaptors for Cullin 3-based E3 ligases (i.e. MEL-26 was the founding member of this CUL-3 adaptor gene family). As there are over 100 such proteins in humans, and over 100 in

What is the biggest “rabbit hole” your lab ever fell into?

My lab identified a recessive, embryonic-lethal mutation in bmk-1, which encodes the 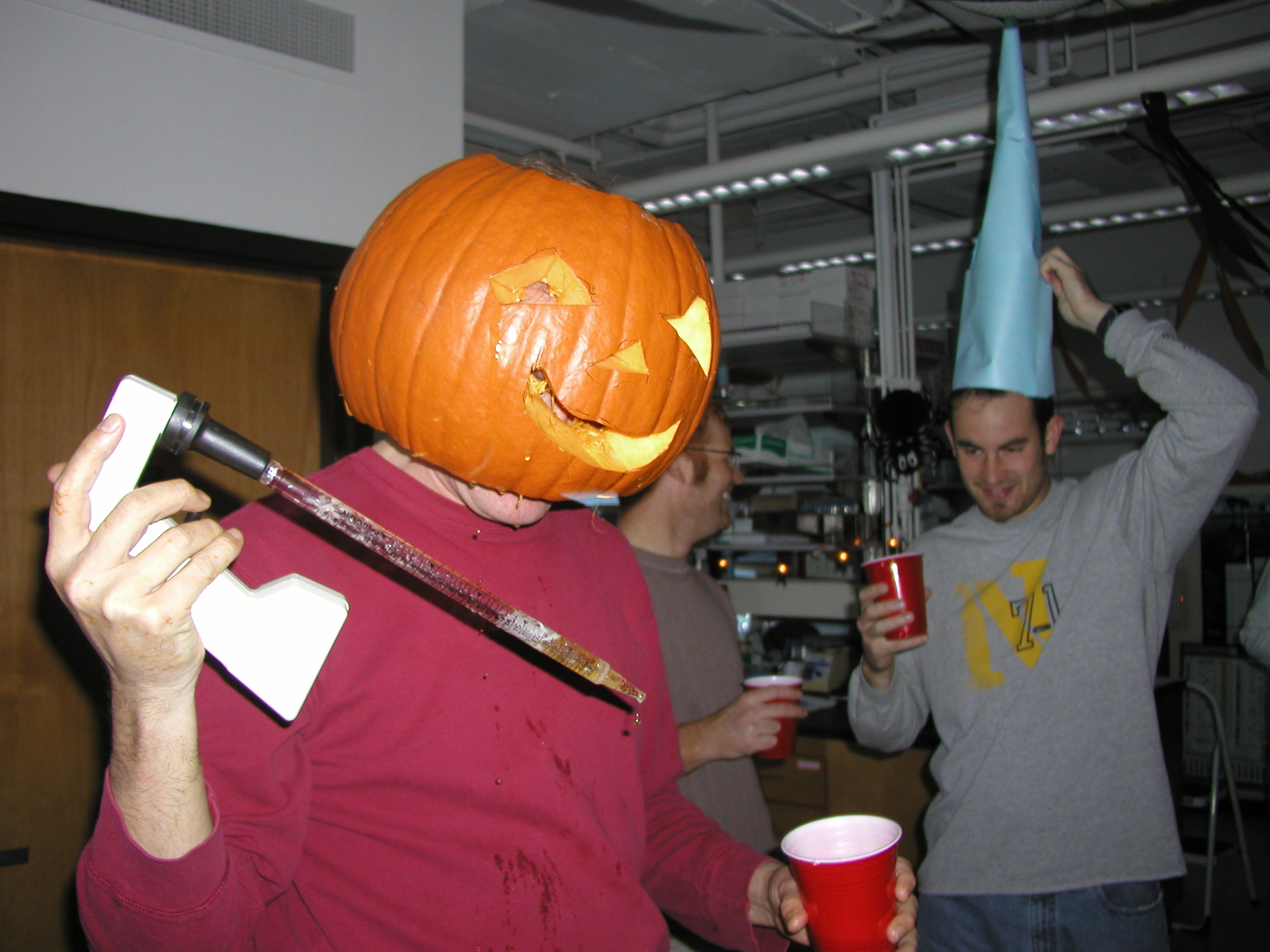 Halloween party at work several years back; I wore a pumpkin for my head. Had to use a 25 ml pipette to drink beer. 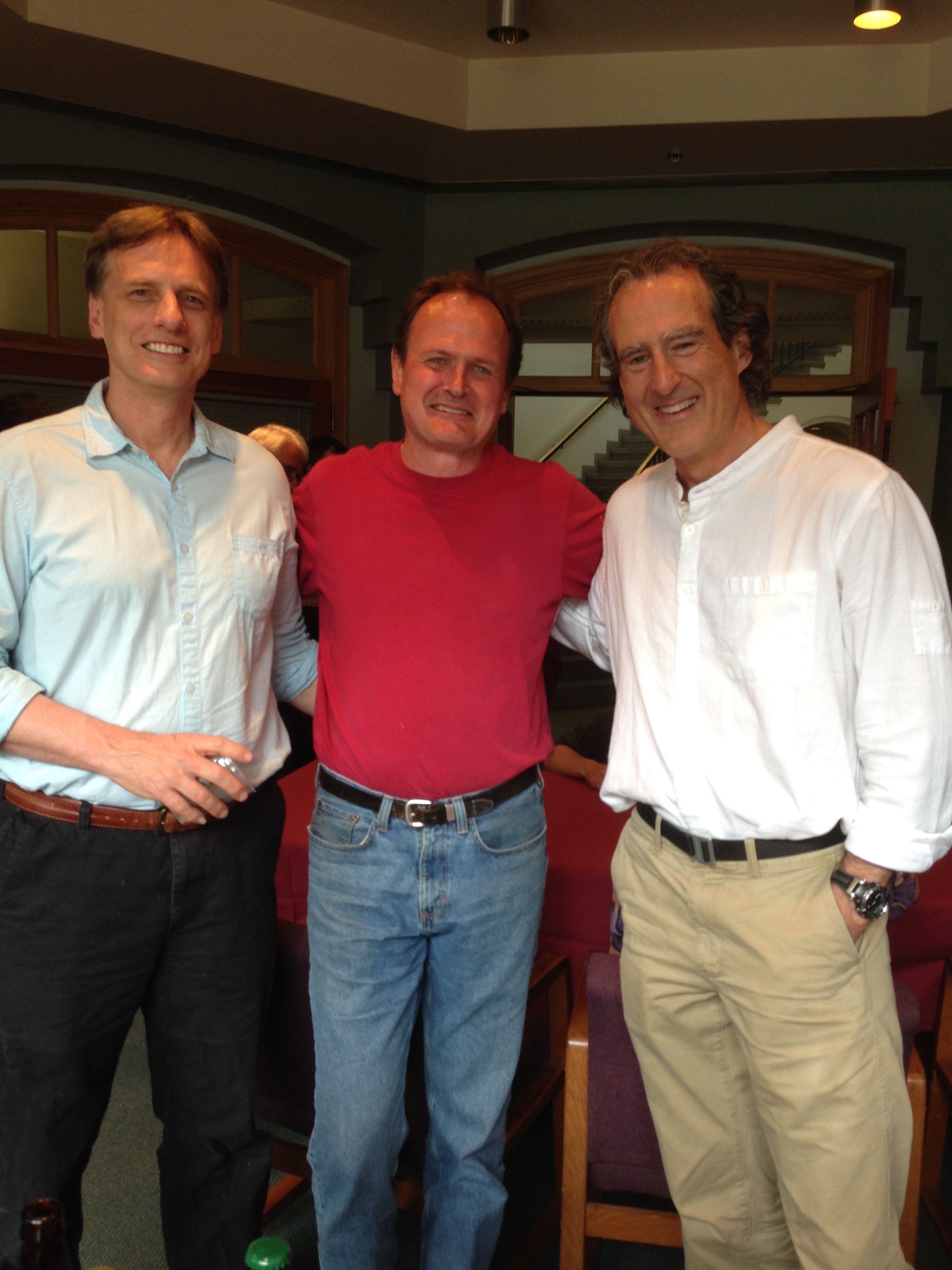 Jim Priess, me, and Craig Mello, from left to right. In Eugene in spring of 2015, when Craig gave our annual special lecture (the Streisinger Lecture), with Jim introducing him. This was a special reunion for the three of us, as Craig and I overlapped as postdocs during my last year in Jim's lab. Of course we all know what Craig went on to discover!
Lab at bar one evening during the C. elegans meeting in Nara, Japan, summer 2014. From left to right, Chien-Hui Chuang, Kenji Sugioka, Amy Connolly, Josh Lowry, and me, with Hitoshi Sawa at far right. One of my all time favorite meetings. Thanks to Asako Sugimoto, among others, for organizing, and to Hitoshi Sawa, for inviting keynote speakers to a symposium in Mishima and leading us on a wonderful climbing trip up Mt. Fuji.
Andrew Chisholm, one of my all time favorite worm geneticists (and co-instructor at Cold Spring Harbor C. elegans course for two years). At top of Mt. Fuji, on trip led by Hitoshi Sawa after the symposium at the National Institute of Genetics in Mishima (after the meeting in Nara), summer 2014. 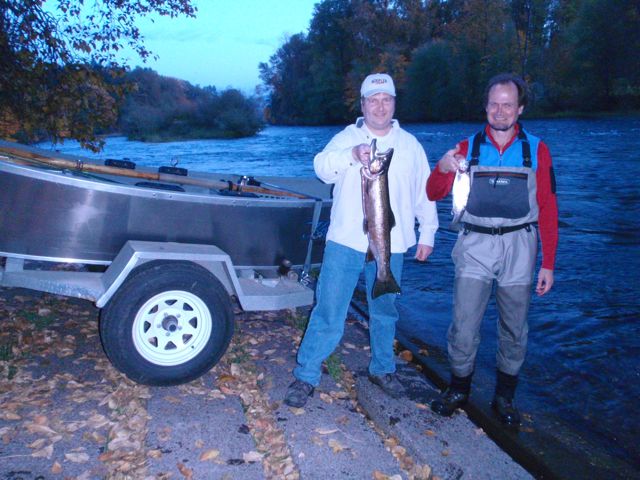 After a fishing trip with Sean O'Rourke in my lab, maybe 2010, on the McKenzie River again. The moral: people in lab catch the big fish, and I get to tell the stories.

Published July 13, 2016 by Bruce Bowerman
Tags: early embryo, Eugene, Oregon, TS mutants Categories: The Worm Lab Project
Editor's note:
Articles submitted to the Worm Breeder's Gazette should not be cited in bibliographies. Material contained here should be treated as personal communication and cited as such only with the consent of the author.